1906: Richard Knowles was living at Orchard House according to Kelly’s Directory.

1911: The Knowles family in more detail were, Richard Ernest Knowles aged thirty nine years was a cotton merchant from Broughton in Lancashire. His wife Dorothy was thirty one years old and was from London. They had three daughters aged from one to six years and all were born in Bollington. Their servants were one cook and a domestic nurse. It is thought Richard Knowles referred to Orchard House as the ‘Manor House’ at this time although I have since learnt that a `Manor House` was situated just a couple of hundred meters down Moss Brow on the right, now divided into three cottages. By 1913 the Kelly`s Directory list Richard E Knowles as having moved to next door Barley Grange.

1918: Charles Henry Haigh was living at Orchard House and had been from at least 1914. However, listed on Bollington Photos Archives is a photograph of James and Bessie Barnshaw saying they lived there in 1918.

(below) 1882-1960 lived at Orchard House for three years. He was a Doctor Of Science and was awarded a CBE 1934. He was given an Honorary Fellowship of the Textile Institute in 1943 and appointed Companion of the Order of St Michael and St George

Below is an extract from Royal Society Publishing, click on images to enlarge. 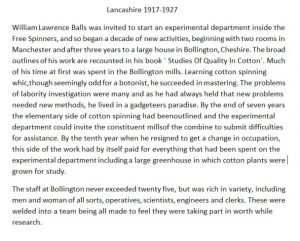 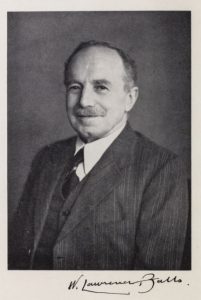 1939: Francis P. Slater lived at Orchard House, he was forty six years old and was a Research Director of Textiles. He lived with his wife Mary, two daughters Frances and Kathleen and one servant Ethel Foxall.

1955: or later Orchard house was occupied by Mr James Mitchell Renton, a textile agent and local Councillor, and his wife Rosemary Constance, who began the Bollington Art Group. Mrs Renton was better known as Binky. They had two sons David and John. They later moved to Higher Lane in Kerridge in 1970. Thank you to John Renton for more updated information.

The house was later bought by Graham and Ann Farrell who only lived in it for a short time and then sold it to the King family.

David and Brenda King bought Orchard House in 1977 and for four years David had his dental surgery there in the two front rooms before moving to it’s current position on Bollington Road. The plaque (below) is known as a dead man’s penny. This one is embedded in a wall above a fireplace. These were issued to the families of those who had died in WWI. The dead man’s name in this example Arthur Rigby, was displayed in the rectangle above the lion’s head. It is not known who Arthur Rigby was, he does not appear on any local war memorials.

Our thanks go to Linda Stewart who has researched census information to present an interesting history of the house’s residents. Also many thanks to the late Brenda King for allowing access to Orchard House.