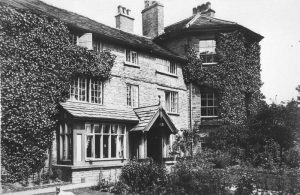 Formerly a farmhouse and farm building, Barley Grange on Bollington Road is set back from the road at the brow of the hill behind a fine stone wall. At one time this was the Barley Mow pub (the licence is thought to have been given up in the late 1860s). These days it is a private dwelling, and is Grade II listed. See the link at the foot of the page for the listing.

It is built in sandstone and has a roof in Kerridge stone-slate with a stone ridge. The house has a rectangular plan, is in ​two and a half storeys and has a six-bay front. Some windows are mullioned, others are sashes or casements. To the left of the house are 19th-century stables and a former steam-driven electric generator house. 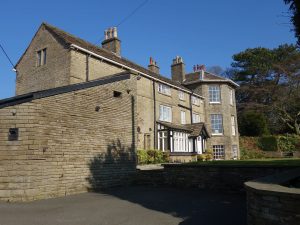 1851: Thomas Welsh aged fifty seven years and from Edgewood in Lancashire was living at Barley Mow Inn as a publican. He lived with his wife Deborah from Middlesex aged sixty two years and Thomas aged fifty eight years who was Deborah`s brother. (It looks as though Deborah already had the surname Welsh before marriage). Also two grandchildren aged five and twelve years lived with them, and a servant from Derbyshire. Strange the children`s parents are not mentioned.

1861: Listed again as the Barley Mow Inn see Old Pubs and Breweries, it was now occupied by John Pownall aged fifty years and described as a ‘farmer of six acres and Inn keeper’ from Bollington, with his wife Margaret aged fifty five years and from Adlington Cheshire, and their family. The licence was given up in the late 1860s.

1871: Margaret Hammond was resident as a ‘companion’, also Lydia, Ellen and Mary Hammond listed as boarders yet only aged nine,eleven and twelve years. There were also four servants.

1881:The occupants at this time were spinsters Isabel Matley Hervey (young photo right) and her sister Rosamund Hervey (photo below). They were aged forty seven and forty two years respectively at this time. They were from a very wealthy family. The occupation of Isabel and Rosamund was `Dividend Of Rents`. Their father Robert Hervey, born in Scotland, was a merchant manufacturing chemist. The Hervey sisters had three servants from Middlesex, Shropshire and Flintshire and a visitor from Middlesex. Before the sisters moved to Barley Grange they lived at Lee Hall (now spelt Legh) in Mottram and Collar House in Prestbury. They weren’t at Barley Grange in 1891 but were both living down south separately and living on their own means with servants.

1891: Frank Railton aged thirty two years and from Manchester lived at Barley Grange and was described as living on his own means. His wife Maud aged twenty three years was originally from Alderley Edge. They had no children at this point. Three servants lived there and all were from Cheshire.

1901: Francis Frederick Grafton aged forty one years was educated at Eton. He was a retired calico printer from Manchester living at Barley Grange with his wife Lilian Susanna Garnett Robinson Grafton aged thirty four years and from Skipton. They had one daughter, Alison Mary, aged six years and one son, Richard Francis Orme Grafton aged five months, (Richard died in Cheltenham in 1968). The Grafton`s were definitely living at Barley Grange in 1894 as there marriage certificate states this, as does the birth announcement of Alison, their first child, made in a London Newspaper. Update, recent information indicates that there had not been a child born at Barley Grange since before 1850 (?). Francis provided two rustic bridges at Gnathole in 1903, one over the leat and the other over the river Dean. There was a tennis court on the main back lawn around this time, and the tops of a pavilion and dove coat can be seen on some old photos of Samuel Greg`s fountain Greg Fountain. The tennis court was still in situ in 1980, but it is unsure when the pavilion and dove coat were removed.

1911: Francis Frederick Grafton still lived at Barley Grange. He was chairman of the BUDC. He is still listed as married but his wife was not present at the time of the census and nor were his children. In fact his daughter Alison at the age of sixteen was at a school for ladies in Hendon. So it looks like Francis and his wife had possibly separated some time in the previous ten years.  Francis had three servants who came from Lancashire, Derbyshire and Rutland. In the book Bollington 1911 it states that Frances had a new wife in this year, she was just twenty one years old, I have no evidence of this as yet. Francis Frederick died on October 27th 1937 at Cartery, Sway, Hampshire. His first and/or only(?) wife Lilian died in New Forest Hampshire in 1942 which is very close to where Francis died five years earlier, so perhaps they reunited if indeed they ever did split up.

1914: Richard Knowles was resident at Barley Grange having moved from Orchard House next door. He was a Calico Merchant from Lancashire and was aged thirty nine years. His wife Dorothy was thirty one years old and from Shepherds Bush. They had three daughters at this point aged between one and six years, all were born in Bollington. They also had two servants living with them and a year later a Red Cross nurse Edith Sweet was residing with them whilst working at Rock Bank House which was being used as a military hospital at this time.

In 1914 and 1926:  Miss Charlton is also listed as living at Barley Grange, perhaps she was a servant to Richard Knowles above.

1934: Stafford Taylor was resident in this year according to the Electoral Roll.

During the second world war Barley Grange was used as a rest home for pilots, it was also used by big wigs in the Conservative part as conference and committee rooms. In a tiny room, to the left of the fireplace in the Great Hall, were several dozen signatures of those who visited Barley Grange including politicians and the pilots, possibly including Wing Commander Guy Gibson. He led the 617 (Dam Buster) squadron of The Royal Air Force, and was a prospective parliamentary candidate for conservative party shortly before his death.

Here is the story of Guy….

the conservative MP for Macclesfield, was due to retire and was looking for a replacement. In February 1944 he approached Guy Gibson

to suggest he consider standing for Parliament, Gibson agreed, but first he had to be selected by the local party. Gibson made visits to Macclesfield to campaign for selection. On one occasion he shared a platform with Lord Vansittart

who gave his name -Vantsittartism- to a form of collective German guilt of war. A short list of candidates was drawn up, which included Air Vice Marshal Don Bennett

. Gibson was selected by a narrow margin and became the Conservative prospective parliamentary candidate for the constituency despite the constituency party`s having taken him on knowing his circumstances as a serving officer. Gibson resigned as their candidate in August 1944 citing the demands of his service career. Gibson died in a mysterious plane crash (friendly fire) on his way back from another mission over Germany on September 19th of that year. This information has been included here to suggest there is a strong possibility Guy Gibson did go to Barley Grange to visit the resting pilots as part of his campaign to be selected as a prospective parliamentary candidate. And who knows, perhaps he did actually leave his signature.

1949 -1980: The Ritson family John and wife Nora, plus Nora`s mother lived at Barley Grange. John was a solicitor. John and Nora had one child Daphne in 1950. They had a turkey farm at one point, remnants of which were still evident when the Hobsons bought the house in 1980. The gardener in the 1950s, 60s and 70s was Fred Unwin, he met his wife Hazel at Barley Grange as she was the nanny for a while. Fred was even passed on to the new owners of Barley Grange in 1980. Amy Harwood was a cleaner in the 1950s and her daughter Dorothy used to play with the Ritson`s daughter Daphne. Amy is still with us aged 100 years as of 2021! There was also a nurse called Johnson who `lived in` for four years until 1960), and also a housemaid Hannah. Daphne also remembers two more of the nannies she had over the years, Mrs Service and Miss Mitchell. A further cleaner in 1964, and remembered by locals, was Jean Clowes. Daphne grew up in the house as an only child, she was the first child to be born at Barley Grange in 100 years, the second child was Daphne`s own daughter in 1978.

1980: Arthur Hobson and his wife Carole (nee Thompson), lived at Barley Grange and almost definitely saved it from dereliction. They didn`t move in straight away because the house was in such disrepair. The Hobsons then had the house listed in 1981 and moved in. They also had a granny flat made for Carole`s mother Edith Thompson. Around 1990 Arthur Hobson divided up Barley Grange (to sell) and the Coach House, and split the land equally between them, keeping 6 acres, nicknamed the turkey fields, with the Coach House, which he renovated for himself and it remains in the family today.

2003: The present owners have been at Barley Grange for eighteen years as of 2021.

website. Our thanks go to Linda Stewart who has researched census information to present an interesting history of the house’s residents. Thanks also to Martin and Jaqcuie Allmand-Smith for a great deal of information and photos. Thank you to Susan Poynton and Wendy Ann Cheetham and several locals for some information on the history of residents at Barley Grange. And I am indebted to Daphne Von Achten nee Ritson for her information over the thirty years her family lived at Barley Grange. And also Esther Williams nee Hobson who lived there in the 1980s and her mother Carole Hobson.