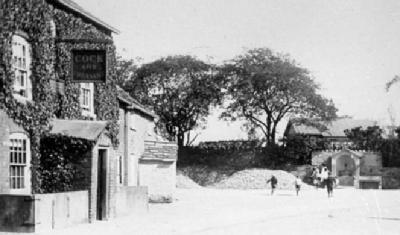 The Greg Fountain, at Bollington Cross, was opened on August 7, 1904. It was erected to “the memory of some good men and women, a great part of whose lives was spent among us, and who loved this village and laboured for its welfare.”

At the opening it was stated that it was the gift of the surviving members of their families (the Gregs) to the inhabitants of Bollington Cross and the neighbourhood, who were asked to “take good care of it, make good use of it – for man and beast – and not to forget those whose names appear on it.”

The names are Samuel Greg, of Lowerhouse Mill, who came to live at Turner Heath in 1832. He established the first Sunday School in an out-building at Turner Heath; gave land for Bollington Cross school and later lived at The Mount.

Mary Greg, his wife, who became the helper and adviser of almost every household; Amy Greg, their eldest daughter, born at Turner Heath, 1840. Had her own Sunday School class; and Francis Greg, son of John Greg of Caton, Lancaster, who came to Turner Heath in 1876. Francis will always be remembered for his gift of the Recreation Ground in 1901.

Beginning in 2005 the Greg fountain has become the centre of Bollington’s well dressing celebrations. Each July the fountain is dressed with flower pictures and they are unveiled by the Town Mayor. This is followed by Maypole dancing performed by one of the primary schools, each year a different school taking turns.