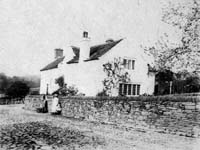 The house, one of the oldest in Bollington is stone built and consists of an old building with a wing attached at a later date. The old part has stone mullioned windows with the front wall three foot thick at ground level tapering to the thickness of the roof. At some period extensive alterations have been made but great care has been taken to match the original. For example, new doors have been fitted and although they are wide and high, similar to the Georgian period, they are oak and panelled to match the older doors about two foot wide in an oak framed wall which is part of the original house. Also the roof has been removed as shown by the old mortice holes, it appears the original oak beams were used in the renewal. The alterations and the newer wing were probably carried out when it was the home of a Gaskell known as Francis of Sowcar the second. There is a grade II listed building at Sowcar Farm described as a corn barn. Listing SJ9427477950 Barn at Sowcar Farm

The earliest record traced is a marriage settlement made between 1693 between John Broadhurst and his wife Lydia, daughter of William Shelhorne of Buglawton. In 1703 it passed to their son Thomas who, in 1735, sold it to Thomas Gaskell of Adlington. He in turn gave the farm and lands at Hedgerow to his son John Gaskell a year later in 1736.  John passed it on to his son John Gaskell of Tower Hill Rainow. The property remained in the Gaskell family until 1930 when it was sold by Mrs Maud Kennedy, who was the niece of Miss Ann Theodora Gaskell.

1841: James Hough is listed as living at Sowcar Farm.

1851: James Hough aged forty eight years was still at Sowcar farm. He was a farmer and butcher from Macclesfield and lived with his wife Hannah aged fifty years and from Bollington. They had four servants/assistants, the youngest being just fifteen years old.

1861: James Hough was still at Sowcar Farm according to Kelly`s directory. But by the next census in 1871 he had moved to Butley to live with his sisters and was a widower. But he had still been at Sowcar farm up to 1870.

1881: John Stubbs aged sixty three years was now a stone mason as well as a farmer of 67 acres (down from eighty acres in 1871) at Sowcar Farm. John died in 1886. John`s wife Mary who was mentioned in the previous census had died in 1873. John`s son Henshaw was twenty nine years old and worked as a farmers son. John`s daughter Mary was also still living at Sowcar Farm, she was twenty seven years old. There is no mention of daughter Edna who was on the 1871 census , she would have been twenty five years old. John`s daughter in law Sarah Maria Stubbs (wife of Henshaw), aged twenty four years, was also living at Sowcar Farm, she was also born in Rainow. Sarah is photographed below in 1910, the boy stood with her was most probably her son Leonard at the age of eleven years.

1891: Henshaw Stubbs was now the head of the house following the death of his father John in 1886. Henshaw was married to Sarah Marie who was thirty four years old. They had one daughter Mary J Stubbs, aged nine years and four sons Percy William, James, John and Richard, ages seven, five and four years and eight months respectively. There was also a servant named Edna Ridgeway who was aged fourteen years and from Bollington.

1901: Sarah Maria Stubbs was now the head of the house (Henshaw her husband had died on 27 July 1900 aged forty eight years). She was now forty four years old and described as a farmer. She lived with nine of her children, Mary Jane, Percy William, James, John, Richard, Elizabeth, Ellen, Henshaw jnr and Leonard jrn. Their ages ranged from nineteen years to two years. There was also a cow man living on the farm named William Biddulph aged twenty years, he was born in Rushton in Staffordshire.

1911: Mary Jane Stubbs was the head of house in this year as her mother Sarah Maria had moved to her son Richard`s and daughter Ellen`s Burton Farm in Saltersford around 1911. Mary Jane was twenty nine years old and a dairy farmer. She was single as were her siblings. She lived with her five brothers Percy William (died 1 January 1929), James, John (see 1939 census), Henshaw (named after his father) and Leonard, aged between twenty seven years and twelve years old, and one sister Elizabeth aged eighteen years. All were born in Rainow, quite possibly at Sowcar Farm and all were working at home on the farm. At least two of the boys fought in the first world war, Henshaw and Leonard. (Leonard died in the Great War in Salonica in Macedonia on 18 September 1918, his body was never found). There was also a boarder staying at Sowcar Farm named Jane Potts aged thirty three years and from Bollington. She was a Reeler at a cotton spinning mill and was listed as married.

1939: A branch of the Stubbs family were living at Sowcar Farm having come from Baytree Farm on Hedgerow some time in the 1930s. It is possible they had been living with John`s mother Sarah Maria at Baytree Farm (until her death on 3 April 1938) after she had moved there from Burton Farm in Saltersford.  Head of Household in this year was John Stubbs, he was fifty two years old and was a dairy farmer. John had previously lived at Sowcar Farm with his siblings in 1911 and had probably been born there. His wife Martha (nee Lomas) was three years younger than him. They had two children living with them, Mary (who later became a Henson) aged nineteen years and described as a `farm worker assisting father`, and their son Leonard (Jnr) who was ten years old and still at school. There was also a retired dairy farm worker living at the farm, his name was George Lomas and he was seventy three years old and was probably Martha`s father.

1945: Eric R Hanson was at Sowcar Farm. He was back from Thailand where he had been serving with the Northumberland Fusiliers