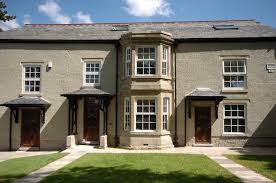 A handsome double-fronted Victorian house and outbuilding Brook House at 53 Wellington Road (previously called Bollington Road in the 1851 census and then called Bollington Lanes in 1861 census) was built around 1860 in stone with Stucco render. Brook House is protected by the CEC SPD. Prior to about 1775 the site was occupied by Peter Lomas and his brother Elias Lomas who jointly ran a tannery there.

1871: William Oliver who was forty five years old lived at Brook House. He was a cotton manufacturer and was born in Bollington. His wife Catherine aged forty three was born in Devon. They lived with their four children and two servants and had three visitors on the day of the census from Stockport, Bolton and Halifax..

1891: William King from Manchester lived at Brook House. He was fifty six years old and was a Calico Bleacher who was listed as `out of business`. He lived with his wife Annie who was the same age, Annie was from Warrington. Also living with them was Mary their seventeen year old daughter.

1890/99 : Kelly`s Directory lists Frederick George Hickson as living at Brook House. He was made an Assistant Managing Director of Olivers Mill in 1897.

1901: David William Main lived at Brooke House at this time, he was aged thirty years with his wife of the same age Wilhelmina. He was born in Liverpool to Scottish parents (his father Robert was a Corn Clerk and later a Book Keeper). David himself was a physician and surgeon and a Medical Ministry Of Health to the Urban District Council (UDC)  https://en.wikipedia.org/wiki/Urban_district_(Great_Britain_and_Ireland)

and also a Medical Officer. He was a public vaccination doctor for Bollington district and a certified factory surgeon and was a member of the Macclesfield Union. Incidentally he was one of the first people to own a car in Bollington.

1911: David William Main still lived at Brook House with his wife Wilhelmina and by now they had two sons Donald aged eight years and Ewan five years. There was also a servant and a gardener. At this time Dr David Main held a small surgery in Brook House before it moved next door to Waterhouse perhaps he moved next door too as he is no longer at Brook House by 1915.This is doubtful though as Waterhouse was supposedly empty in 1911 for repairs to be carried out. By 1923 Dr Main had moved back to Merseyside at Birkenhead. 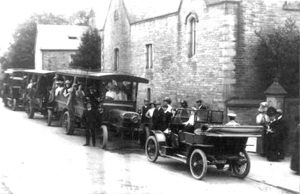 Brook House in the background far left of the photo above circa 1912, taken on Wellington Road.

1914 to 1924: Thomas Conrad Reeve Medical Officer Of Health, LRCP London, MRCSEng was recorded as living at Brook House this year.

1924 The Coope family of doctors were living here for a while and Dr John Coope MBE was actually born in Brook House.

In 1939 a dance teacher named Rhoda Dawson aged twenty five years lived at Brook House with her husband Jack Broomhead. He was thirty two years old and worked as a gas works manager. Rhoda was responsible for many marriages among Bollington couples who met regularly at her dance school in Brook House (including Linda Stewart`s own parents in 1955).

Rhoda is buried in Pott Shrigley graveyard under her married name of Rhoda Broomhead. Sadly later in life she lost her memories of her lovely dance school and all the pupils she had helped to find their future partners in life.

Brook House is now divided into three private residences. The photo below right shows what Brook House looked like before this.

The photos below are kindly shared from Richard Brimelow who has also provided some information. They are photos of the Old Coach House which is next to Brook House. The photos were taken in 2005 before the Coach house was renovated and much of the outline was retained but everything renewed, the roof, windows, walls (regrouted) and doors. On one photo (lower left of the four) the wing of Brook House is shown. 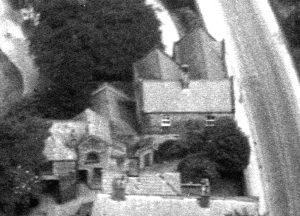 This 1926 photo above shows the buildings layout. Brook House standing centre right next to Wellington Road.

Our thanks go to Linda Stewart, who has researched census information to present an interesting history of the house’s residents.

Thanks also go to Richard Brimelow for sharing his photos and information.