On July 23rd, 1838, Thomas Oliver bought from Thomas Creswick, Samuel Rodgers, and Mary Creswick, for £6,000, the land on which the Waterhouse Mill was built, and the land for the reservoir by means of which the Waterwheel was driven, also “The Waterhouse” and fields adjoining, as far as the boundaries of the estate of C. R. B. Legh Esq. of Adlington Hall 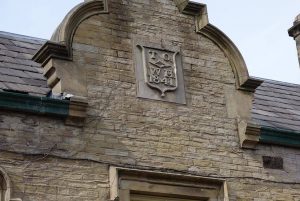 The Waterhouse was originally built in the seventeenth century by the Lomas family who had a tannery next door where Brook House stands today, Thomas Oliver then moved in around 1845 and extended the building although the plaque (see above) says he built it in 1841. It was partly demolished on the right hand side in around 1870 and rebuilt larger.

1851: Thomas Oliver (1786) was widowed at this point. His two children from the previous census still lived at The Waterhouse along with a sibling William C L Oliver 1826. There were two servants.

1861: Thomas Oliver b.1786 had died in 1858 so his son Thomas Oliver 1821 was the head of house. He was as yet unmarried and lived with three servants and his brother William however William was away visiting his parents in law on this day.

1871: In this year the Oliver`s were living in Lord Street possibly because The Waterhouse was having some major structural work done.

1881: Thomas Oliver b.1821 and his wife Maria b.1830 were back living in The Waterhouse with their daughters Maud Mary aged thirteen years and Adeline aged eleven years. There were also three visitors and three servants.

1891: Thomas (b.1821) and Maria Oliver aged sixty nine and sixty one years old were still residing at The Waterhouse with their sons Edmund aged twenty five years and Percy C Oliver 1866 a year younger. Also still living with her parents was Adeline aged twenty one years. They had two servants.

1901: Thomas Oliver b.1821 had died in 1897, followed by his wife Maria in 1901. Living on Wellington Road in this year and assuming it to be at The Waterhouse was Edmund Lomas Oliver 1865 and his wife Florence aged thirty years and from Leeds. They had two sons and two daughters aged between one and five years old. They also had five servants.

1911: The Waterhouse was empty this year as Edmund Lomas Oliver was in Farchynys, Dolgellau visiting family with his wife Florence and sons Ian Maurice Lomas Oliver and Peter Lomas Oliver.

1939: Geoffrey Coupe the local doctor was resident at this time, he was forty two years old. It is unsure where his wife Eileen (also a doctor) and family were living at this time. Also living there were Ruth Bennett aged forty five years, a housekeeper, and twenty five year old school teacher Patricia Roberts. Doctor Geoffrey had previously lived at Heath House (a division of Turner Heath House) Bollington Cross and Limefield House off Clarence Road Bollington.