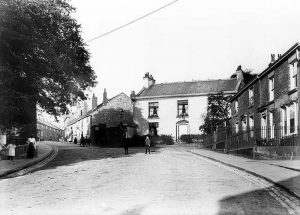 Beech House which is now demolished was once known as The Manor House or `Parrotts` to locals in the late 1940s/50s. It was located where the entrance to the Tullis Russell paper mill is today on Palmerston Street. This entrance was once known as Burma Road for reasons unknown.

1861: Beech House was not named so yet. Widow Eleanor Gaskell from Hazel Grove aged forty five years was living there with her Bollington born daughter Jane Eleanor aged nine years along with their two servants. Eleanor Gaskell is thought not to be related to the Gaskells of Ingersley Hall.

1871: Beech House was still not named. Eleanor Gaskell and her daughter Jane Eleanor were still living there. Also there but listed as a visitor was Thomas Parrott aged twenty four years. He was from Sutton near Macclesfield and was described as a law clerk. He was the son of Thomas Parrott senior who was the town clerk of Macclesfield. There were also two servants from Leek in Staffordshire living at Beech House.

1881: By this time Thomas Parrott had married Jane Eleanor Gaskell and had four children aged between five months and six years. Thomas had become a partner to John Horsefield in a Bollington Brewery. A leading conservative Thomas had also been a member of the parish church choir for thirty years and Choirmaster for twenty six years. Also listed as residing at Beech House (still not named so yet) were Jane’s mother Eleanor sixty six years old (she was still listed as `head of the house`) and also a niece of Eleanor`s from Hazel Grove, Stockport, along with two servants from Nantwich and Winsford.

1891: Eleanor Gaskell was absent, she would have been seventy five years old. Thomas and Jane Parrott still resided there with their four children and a different niece from Sutton near Macclesfield. And also two servants from Prestbury and Macclesfield. The house still has no name.

1901: Thomas Parrott by now aged fifty four years was still listed at Beech House, it had finally been named! Thomas was described as `living on own means`. His wife Jane was forty eight years old and their four adult children were aged between twenty and twenty six years of age. Possibly one of those children was actually name Hetty or she may have just been a visiting relative in this photo taken in the garden of Beech House with friend Cissy Cumberbirch aged twenty one years on the right. Photo from John Lashford.

1911: Thomas Parrott aged sixty four years now was still at Beech House. His occupation was described simply as a `gentleman`. His wife was also still living with him as were their four adult children all listed as single. They were Eleanor Ann Parrott, Peter Gaskell Parrot (electrician), Bertram Parrott (farmer) and Emily Maud Parrott. Quite remarkable they are all still living at home and none had yet married, all aged between thirty and thirty six! Peter was listed as a lodger at Beech House in 1914. He paid 16/- (sixteen shillings) to his father Thomas weekly for a bedroom on the first floor.

1926: The Parrott family were still living at Beech House according to Kelly`s Directory although Thomas had passed away in 1914. In 1921 Mrs Parrott sold the field behind Beech House to Bollington Urban District Council for use as an extension to the adjacent St John’s churchyard. The council made £50 available for this purchase, but it is not clear whether this was the whole cost or just a contribution, with the church subscribing additional funds.[1]

1939: Peter Parrott (unfortunate name) son of Thomas and Jane Eleanor was listed as living with his sisters Helena and Emily at Beech House with a nine year old child Frederick Harris. Peter was a director of Heavers Brewery which was at the far end of Church Street.

1950’s: Peter Parrott was still living at Beech House around 1956, looked after in later years by Jim Webster. Peter had a bit of a reputation for being intimidating and certainly chased off school children who raided his orchard after they had climbed over the wall from their school playing field (which was owned by Parrots and called Parrott`s field) at St John’s School Church Street. Old St John’s School.

Bollington Civic Society have in their collection the family bible from Beech House.