At Clarence Mill you will find Bollington Civic Society’s  Discovery Centre . It continues to be very popular with those wishing to discover more about the town and its history and view their amazing collection of historic pictures, many of which appear in these pages. Canalside Radio on 102.8fm

has firmly established its popularity throughout the east Cheshire area. A wide range of sporting activity and achievement compliments all this fun.

For details of What’s On check your copy of Bollington Live!, or look at Bollington Arts Centre

pages. A monthly What’s On leaflet is available at the Town Hall and also available online here

, 18 miles south east of Manchester, in north east Cheshire, in the north west of England – find us on the map 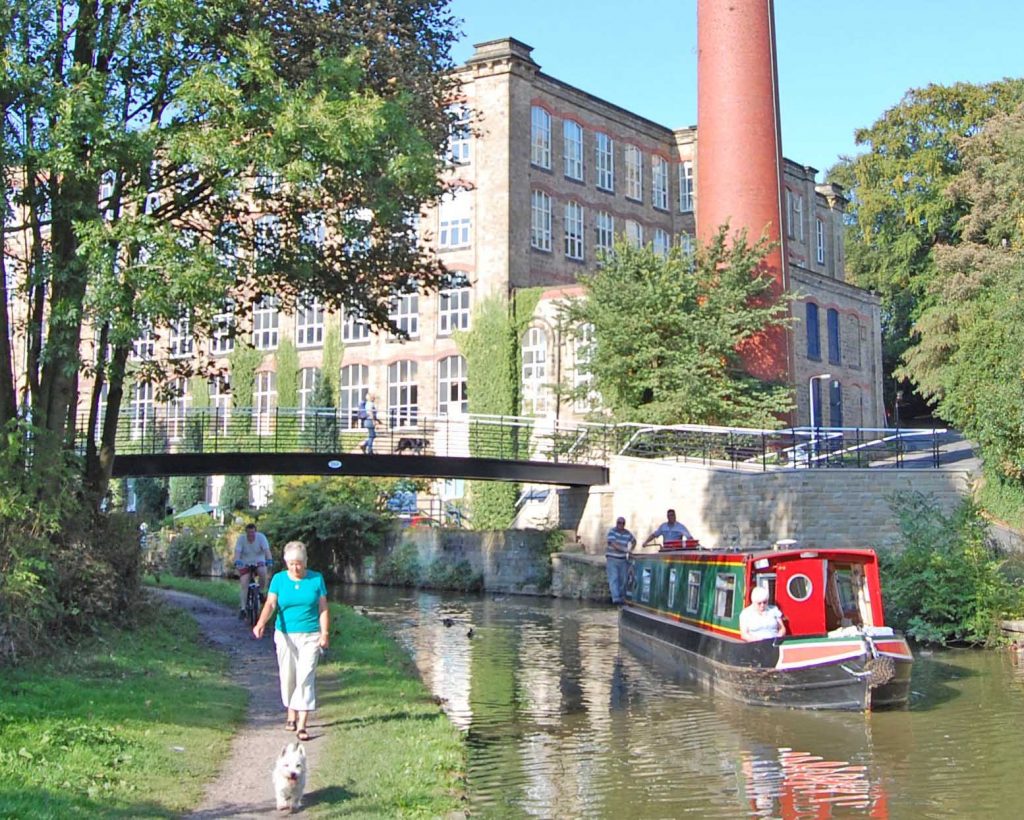 It is a town borne of its rural origins with the industrialisation of the area beginning in the mid 18th century and rapidly developing in the 19th when several large cotton mills were built, coal mines were opened and stone quarried. The opening of the Macclesfield canal in 1831 provided important incentive for industrial development as did the railway that followed in the late 1860’s. In modern times the mills have been replaced by, usually, smaller businesses although there remain two large paper coating mills, our biggest industry today. We also have one of the UK’s leading silk weavers.

Tourism is increasingly important, the town providing an easy base for those interested in walking the hills (we hold an annual Walking Festival in late September

with the Peak District National Park on our doorstep, walking or boating the canal or walking or riding (bikes and horses) on the converted railway track, now known as the Middlewood Way.

Known to its residents as the Happy Valley, this town is a village is a town! What do I mean? Well, it’s a town of 8,300 population (as of 2011) strung out over a distance of about two miles, never very wide, giving the feeling of one long village. Present day Bollington is really based around three villages that became merged together – Bollington Cross, West Bollington and Bollington, and on the edges you will find Kerridge on the high ground and Lowerhouse in the valley of the river Dean.

There was a significant increase in the population during the 1970’s, 80’s and 90’s turning the town into a dormitory for Macclesfield and Manchester. Bollington is regarded as a very desirable place to live and work. This has to do with the advantages of its beautiful location amongst the hills, known as the Cheshire Peak District

, and the fact that the main street is, for all practical purposes, a no through road; the road does go through but leads mainly to places that can be reached more directly by other routes.

This page provides a range of links to other pages giving an in-depth view of the town and the interests of its population. Have fun! Note that Wednesday is traditionally half day (or early) closing day for shops in Bollington and many still follow this tradition by closing at lunch time – usually 1.00pm – but not the Post Office, Pharmacy or the Co-op, all at West Bollington, or Belfield’s Bakery in Palmerston Street. The Chinese chippy in Palmerston Street is open every day except Tuesday, from 5pm.

Some major projects have been completed or are under way –

and from the  Discovery Centre  – see the Bollington Outdoors page for more details. There is also our annual Walking Festival in late September

There are now dozens, possibly hundreds of videos of Bollington and Bollington events saved on YouTube

! Go and make a search and see what you can find!

Bollington groups are able to have and manage their own pages on the site! Are you running a group – sport, arts, social – that would benefit from having a couple (or a couple of dozen) pages but doesn’t want to develop a complete web site? If so, this is your big opportunity – free pages on the Happy Valley website – you decide what you want on your page, what pictures, and you can set it up and maintain it, it’s really very easy, absolutely no IT knowledge required, you can do it on a PC, Mac, tablet, or even a smartphone (not so easy), anything with a web browser. Do message the Webmaster to discuss.

Many photographs in the Happy Valley website may be enlarged by selecting them (hover mouse over image and left-click), or tap the picture on a touch device.

There are several links to send an email on this website – these will only work if you have a mail server running on your PC (eg. Windows 10 Mail, Outlook), tablet or phone.