There were eleven children in total born to Joseph Stewart and his wife ‘Fanny’ (Merinda) (née Audley from Newcastle-under-Lyme). Some were born in Church street, Bollington before the family moved to Rock Cottage, Beeston Mount, Bollington (between 1895 and 1900). Two children died as infants: Alice at four months and George at three years. Two sons died in WW1 defending their country: Gordon and Hedley Stewart.

Refer to other pages for Hedley, Gordon and Donald.

He was thirty one years old when WW1 broke out. Conscription was compulsory from 1916 for unmarried men between the ages of eighteen and forty one years one. Bert didn`t fight in the war presumably as he married in 1911. His wife was Flora Belle Aked (1887-1938) from Handforth, Florrie was a very tall lady whereas Bert was rather short. In about 1911 he moved out of his childhood home Rock Cottage to start his married life at 64 High Street Bollington with his new wife Florrie, and they were registered as living there in 1919 according to the Kelly`s Directory.

Bert is listed in the Kelly`s Directory again in 1923 as being the secretary for the Bollington and Pott Shrigley Conservative Club, something his father Joseph had always done. His father had probably retired from this duty by now as he would have been in his mid seventies.

Bert lived in High Street for sixty five years until he died. He and ‘Florrie’ had one child Dorothy Audley Stewart who married Philip G Norton. Dorothy died suddenly in November 1994, she was a widow aged eighty four years and was living in Ivy Lane, Macclesfield at this time.

Norman married again after his first wife died, to Helen S. Rennie in Birmingham in 1954 and a third marriage to Lillian Gaines when he was sixty four years old. He died in Bristol when he was eighty one years old.

‘Doris’ was the only child of the Stewarts who lived all her life at Rock Cottage, she never married. From 1942 (when her sister Connie died) Doris lived on her own there until shortly before her death in 1988 aged ninety one. After living her whole life at Rock Cottage with no electricity she was reluctantly placed in a residential home, possibly Mount Hall on Flash lane, and died three months later whilst sitting at the dining table with the other residents.

She was the longest surviving child of Joseph and Fanny Stewart.

Doris had a few adventures later in life, she collected signatures of famous people all over the world and then sold them.It is believed she sold her brothers` war medals which is a great shame.

She used the money to go on trips abroad on her own. She was quite a solitary soul.

The following images show a newspaper clipping about Doris’s `hobby`, and of Doris on a float at Bollington Carnival in 1955. In the close-up Doris is on the left, with Mary Nolan, Joyce Hayman, Joan Walker, Cathleen ? and two others.

‘Beattie’ was the youngest daughter of Joseph and Fanny Stewart. She worked at Ingersley Vale Bleachworks and later married Fred Bamford 1894-1962 from Grimshaw Lane, Bollington. They moved to Dialstone Lane, Stockport and had one son Frederick Gordon Bamford 1922-1988. Beattie died in 1979 at the age of seventy nine. The following photos are of Beattie with brother Donald and sister Doris (click on photo to enlarge), and Beattie when she was in her twenties. 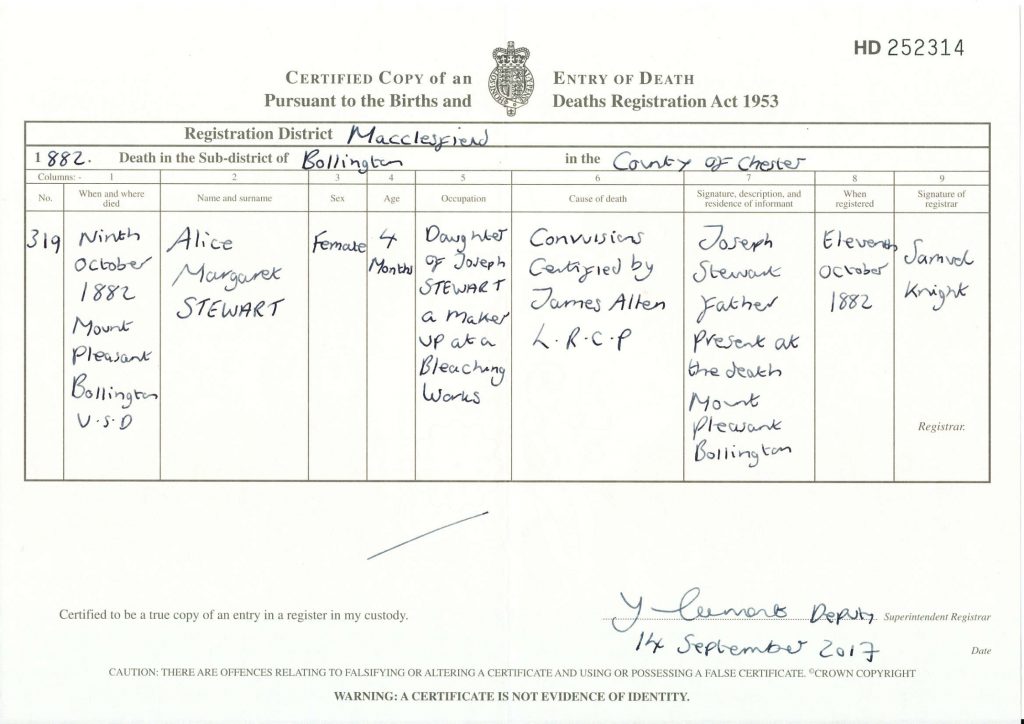 U.S.D. on the birth certificate stands for Urban Sanitary District.

I am indebted to Linda Stewart (grand-daughter of Donald) for this fascinating account and photo collection of the Stewart family of Bollington.