Here are two pictures of Rock Cottage, Bollington, (built between 1844 and 1858), on Beeston Mount, Bollington, the first from about circa 1904/5, and the second from 2015. The first picture is of the Stewart family with Joseph Stewart the head of the family at the centre, together with his wife Fanny, and their nine children Gordon & Hedley Stewart , William, Robert, Donald Audley Stewart, Connie, Doris, Beattie and Norman. The second picture is of  Linda Stewart great-grand-daughter of Joseph Stewart, and grand-daughter of Donald Stewart. Donald Stewart and his wife Stella ran the Dog & Partridge inn for a few years in the 1960s and 70s. Members of the Stewart family lived in Rock Cottage until 1987 (the last being Doris Stewart). So, that`s possibly ninety five years at Rock Cottage if they had moved there straight after the 1891 census when they were in Church Street!

1871: The Holden family lived at Rock Cottage at this time. Twenty five year old George Henry Holden from Lancashire, was a cotton spinner and employer of fifty. He lived with his wife of the same age Emme Annie, from Northumberland. They had one child Ethel Grace aged one year. Also living with them was George`s sister-in-law Annie Stephenson who was aged seventeen years and unmarried. There was also a nurse, Mary Ann Simpson from Kirkham in Lancashire, she was aged thirty three years. And a nineteen year old servant named Maria Kershaw or Henslaw from Chelford.

1901: The Stewart family family lived in Rock Cottage. Head of the house was Joseph aged forty seven years, he was born in Adlington, Lancashire. He was a calico bleachers maker up at Ingersley Vale Mill working for Alfred J King. His wife `Fanny` Merinda, nee Audley, was thirty seven years old and from Newcastle in Staffordshire. Two children had died in infancy, Alice and George Douglas. There were eight surviving Bollington born children by the time of this census, (Donald Audley Stewart was not yet born). The eldest was Robert or `Bert`. He was seventeen years old and also worked at Ingersley Vale Mill. William Audley or `Billy` was fifteen years old, he also worked at the same mill as his father, as did Hedley aged thirteen years. Agnus Constance `Conny` was the eldest surviving daughter, she was eleven years old. Norman Audley was seven years and Doris Lilian was four years old. Gordon Audley (Gordon & Hedley Stewart) was two years old, and the youngest child at this point was Alice Beatrice `Beattie` aged eleven months.

1911: The Stewart family were still in Rock Cottage, minus `Bert` who had married and moved to High Street this year, and where he would spend the rest of his life (another sixty five years!). There was also the addition of Donald Audley Stewart to this census, he was now the youngest child at eight years and last known child of Joseph`s.

1939: Only three of the Stewart family were still living at Rock Cottage at this time. They were, mother Fanny and her two daughters Doris and Connie (Stewart Siblings).

Joseph had died three years early in 1935, William had died in 1920, Fanny and Connie had both died in 1942. Norman had moved to the Birmingham area around 1922, Bert was still in High Street, Bollington and Donald was living in Fairfield Avenue, Bollington with his wife and family. Doris stayed at Rock Cottage for another forty five years on her own! These years were `rent free` apparently, but the owner never realising Doris would live for so many more years! 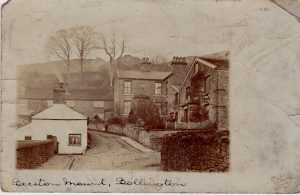 Rock cottage is the two storey house facing down to the photographer, almost central.

Our thanks go to Linda Stewart who has researched census information to present an interesting history of the house’s residents which were mainly her own family.