This house was the premises of Joseph Hamson painter and plumber. He was in business from 1834 and was also a small farmer with five cows ‘of true Yorkshire breed’. Joseph`s bankrupcy proceedings in 1843 suggest that he had overreached himself by building a row of seven dwelling houses and shops. His brother William took over plumbing and painting business. Joseph’s son Alfred took over the business in the 1860s followed by Alfred’s son Joseph Jnr around 1890. Joseph Jnr was still living there in the early 1900s. 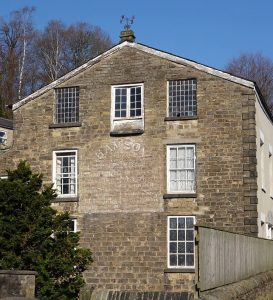 The business name Hamson can still be seen on the side of the house. In September 2020 the whole panel is being restored!

1851: Joseph Hamson senior was living at 6 Shrigley Road with his wife Jane who was forty years old. Their son Alfred was thirteen years old at this point and a servant named Thomas Wynne aged twenty seven years lived with the Hamsons and was listed as a plumber so was possibly an employee rather than a servant.

1861: Unknown occupants. Joseph senior is recorded as retired and living in Princess Street in 1861 with his wife Jane and sons Charles and Edwin who were both carpenters by trade and aged twenty one years and fourteen years respectively. So it is unsure who was living in 6 Shrigley road in 1861. It should have been Joseph`s son Alfred, but he was living in Church Street at this time.

1871: Joseph`s son Alfred Hamson was now thirty two years old and listed as living at 6 Shrigley Road (having being a resident in Church Street and still single on the 1861 census). He lived with his wife Elizabeth who was twenty seven years old and their daughter Sarah aged one year and son Joseph junior aged three years. Joseph Senior was now listed as living in a Cottage on Mount Pleasant which is just around the corner from 6 Shrigley Road. And ten years later he was still there aged sixty eight years old. His wife Jane died in 1874.

1881: Alfred and Elizabeth Hamson still resided at 6 Shrigley Road, they had a third child Lizzie aged six years as well as Sarah and Joseph junior.

1891: Alfred and Elizabeth Hamson again still lived at 6 Shrigley Road with their family. Interestingly Alfred was listed as a plumber as was the family trade. His son Joseph junior however was a painter at the age of twenty three years but later became a plumber. His sisters Elizabeth ‘Lizzie’ and Sarah were both Drapers. Alfred died in 1898.

1896: Joseph Hamson junior was listed as being at 6 Shrigley Road in the Kelly’s Directory.

1911. Joseph Hamson junior was still resident at 6 Shrigley Road aged forty three years. He was still a Master Plumber and an Employer in Bollington. His wife Mary was forty six years old. They had three children Jessie Gwendoline aged thirteen years and two sons Joseph Rupert Lucas (known as Rupert) and Frank aged twelve years and six years respectively. A son Geoffrey Challenor was not at home during the census as he was staying with his aunt who also lived in Bollington. Finally another son Alfred born 1895 had died a year later.

1915: Mary Maria Hamson is named in directories as living at 6 Shrigley Road

1939: Joseph `Rupert` Lucas aged forty one years was living at 6 Shrigley Road (he died Oct 1964 at 55 Wellington road). He was living with his wife Mary (nee Bailey). Also listed is Mary Pinfield (Hamson has been crossed out) aged eleven years and Joan Whitney (Hassall written boldly above Whitney) aged eight years. Frank (Rupert`s brother) was living at 55 Wellington Road at this point but it listed in his probate that he died at 6 Shrigley Road in 1960.