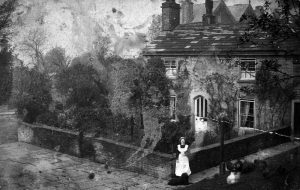 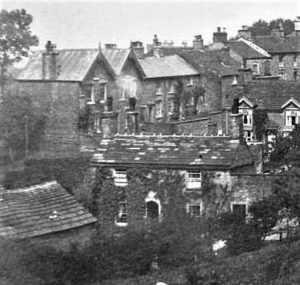 1851: During this year Samuel Snape aged fifty four years and from Rainow lived at Rock Cottage with his forty eight year old wife Hannah and their large family. Mary, their eldest daughter, aged twenty two years was a cotton doubler and was born in Bollington, Cheshire. Her nineteen year old brother William (the only male child of eight) was also Bollington born, as in fact were all the children, and William also worked in a cotton mill (census description of job is hard to read). Similarly their sister seventeen year old Anne was a cotton winder, and then Jane, who was eleven years old, was a cotton piecer. Three more sisters Frances, Harriot and Elizabeth aged seven, four and one year respectively were also listed on this census, as was George Hibbert aged nineteen years and described as a lodger.

1861: Bollington born Thomas Cooke was living at Rock Cottage at this time aged forty three years. He was a farmer of 20 acres and also a stone merchant employing thirty five men. His wife Ann, two years his junior and also from Bollington, lived with him and their four children, all were locally born. Their names were Eliza aged eight years, Allen a year younger, Harriett who was five years, and one year old James. They had a house servant named Martha Day who was twenty six years old and from Flash, Staffordshire.

1871: By this time the house was occupied by retired silk dyer Thomas Ashead who was sixty years old and originated from Macclesfield. His Rainow born wife Hannah was one year older. Their daughter twenty one year old Eleanor lived with them, she was born in Macclesfield and doesn`t appear to have an occupation at the time of this census.

1881: Frederick Swindells aged thirty five years, his wife Emma three years his junior and their family were in residence at the time of this census. Frederick was a cashier in a cotton mill (clerk). He was born in Bollington and his wife in Macclesfield. Fredericks much younger sister Alice G. Swindells aged twenty one years also lived at the house, unlike her brother, Alice was born in Bollington. The eldest child of Frederick and Emma`s was Herbert Martin who was ten years old and a scholar. He was born in Bollington as were the rest of the children. The second born child was named after his father which is strange as this normally applies to the eldest male child, however, the eldest child`s middle name of Martin was his grandfathers name. Frederick junior was nine years old. The third son was five year old Arthur R. and finally the forth son Alfred L. completed the family, he was two years old. A sister to Frederick`s wife Emma, Ellen Davis, was the final occupant of Rock Cottage in this year, she was forty five years old. The family had moved to Rose Cottage, Kerridge at some point but it`s not clear if that was before or after living at Rock Cottage.

1891: After about forty years of absence, a Snape family were back at Rock Cottage and would remain there for at least another fifty years! `Living on her own means` was widow Eliza Snape (nee Cooke -from the 1861 census) aged thirty eight years. Her husband Joseph James Snape had died two years previously at the young age of thirty five years, Joseph was born in Rainow and by the age of sixteen he was a solicitors clerk living at the The Turners, Ingersley Road with his parents. Ten years later he was a solicitor still living with his parents at the Turners Arms. His widow Eliza lived with her two sons James Allen and Cecil Randolph aged seven and three years respectively. All three were born in Kerridge. They had a servant named Mary Ford who was thirty eight years old and from Mottram St Andrew although it`s possible Mary resided next door in Rock Cottage Yard as there were a family of Fords living there, some of which were also from Mottram St Andrew.

1901: Eliza Snape and her two sons James and Cecil were still living at Rock Cottage but without the servant Mary Ford, the Fords in the yard had also gone. The two boys were still listed as being at school at the ages of seventeen and thirteen years.

1911: Eliza Snape was still head of the house now at the age of fifty nine years. James was now a chartered accountant and Cecil a clerk to Halifax Estate Agent. They were both still single and both worked from offices at 28 Wellington Road.

1912 to 1915: Cecil Randolph Snape is listed as a lodger at Rock Cottage renting a furnished first floor bedroom for 20 shillings a week. His landlord was his brother James Allen Snape. 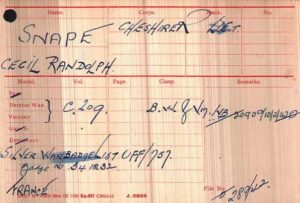 Lieutenant Cecil Randolph Snape (photo below centre) was enlisted in the army from 1914 to 1920. (See medal award photo right).

James was also a Lieutenant in WW1, see photos below. He was an exonerated officer which means he was a prisoner of war, and on being released he was not found to have contributed to his capture, therefore he was entitled to his campaign medals. He was taken prisoner 10th April 1918 and repatriated 13th December 1918, just in time for Christmas! Thanks go to Dave Williams for some of the information on James Allen Snape. He also informed me that Hameln where the prison camp was, of course, where the Pied Piper came from! (click on photos to enlarge) 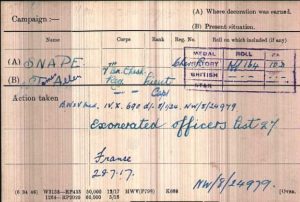 1934: Cecil was at Rock Cottage. However, his brother James was at Hill Side, Hurst Lane with Butley born Marion Snape (nee Carswell), his wife since 1927. They were also incoming passengers on the ship Arcadia in Southampton 1929.

1939: Cecil Randolph Snape was still at Rock Cottage. His mother Eliza had died two years before, and Cecil`s brother James Allen Snape was to die in 1940. Cecil himself died in 1946.