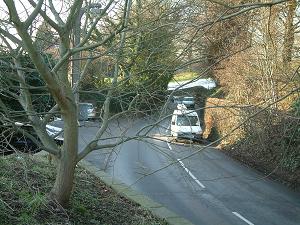 One of the old lanes of Bollington, Flash Lane once called Bench Lane up to 1881, is short narrow and winding, leading up from the Stockport Road to Bollington Road beside the Cock & Pheasant inn. It has a very few houses alongside the road plus driveways to The Mount and to a farm. It also provides access to properties originally alongside Stockport Road but which became isolated when the Silk Road was built in the 1990s. One theory as to the reason for the name Flash was that `Flashing`, (no not that sort!) was escaping after a robbery. It used to be one of the main routes from Manchester for the robbers to off and go into the hills. When you`d been ` on the rob` as it was known in Manchester, you did a flash- you did a runner!

Approach off the roundabout at the northern end of the Silk Road or Bollington Road.

Flash Lane was known as Bench Lane in the 19thC; marked as such on the 1862 map. The Orange Tree inn was located just beyond the bottom end of Flash Lane, approximately where Stockport Road begins today.

This fine country house was built by Philip Antrobus, the builder of Lowerhouse Mill, in the 1820s. It was positioned on the high ground to the southwest of Lowerhouse so that he could overlook his achievements.

The Mount was later (from 1838) lived in by Samuel Greg after he had taken over Lowerhouse mill and the surrounding property.

During the 19thC (and later?) the house seems to have been known simply as Mount. I am not sure when it became The Mount.

Today The Mount is a retirement care home.