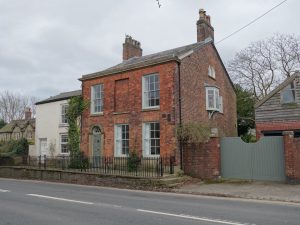 Elm House at 12 Bollington Road was better known to locals as Chadwicks in the mid 1930s onwards as there was a doctors surgery here run by the husband and wife team Drs’ Chadwick.

There were originally three houses here, numbers 8, 10 and 12. Number 8 was demolished many years ago by local builder Ken Lomas and made into a garden. Number 10 is the white fronted house on the left in the photograph left and joined to number 12, Elm House, on the right. Number 10 had an extension built in 2014 and this is where number 8 once stood, just out of the photo above on the left.

Built around 1830, Elm House is a Georgian grade II listed building. This two storey house is built in a Flemish Bond brick pattern, has two brick chimneys and a Welsh slate roof. It has an asymmetrical three-bay front. The upper window, central bay is now bricked up, possibly due to the re-introduction of Window Tax in 1851.

1891: Abraham Williamson was living at Elm House, he was fifty six years old and was a stone merchant from Whitworth in Lancashire. Abraham had travelled around a lot. By the age of sixteen years he was apprentice grocer in Wales, then by 1861 he was living at Endon Quarry Cottages (possibly Turret Cottages). He married the following year. Ten years later he had moved down the road to Field Cottage, this was followed by a move to Beech Knoll on Beech Lane in Macclesfield in 1881. After living in Elm House in 1891 Abraham moved to Nottingham and died there in 1904.

1901: John Charles Etchells aged forty two years from Manchester was living at Elm House, he was a Mechanical Engineer. He was also the treasurer of the Bollington Cross Sunday School Guarantee Fund. John lived with his wife Jessie who was the same age and was also from Manchester, and their four children aged between eight and fifteen years all born in Heaton Chapel except the eldest daughter Matilda who was born in Northumberland. They also had one servant/governess, twenty eight year old Maud Isabel Hunt from Derbyshire and a visitor Agnes Eva Williams aged forty five years and from Manchester.

1906: Elm House was a private residence for Tom Witt and family. Photographs can be found in the archive picture collection of the Witt family in the garden 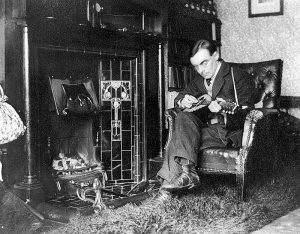 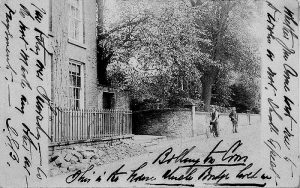 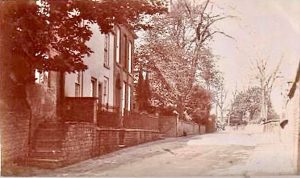 Postcard above left from 1906 of Elm House and a photo from a similar year above right. 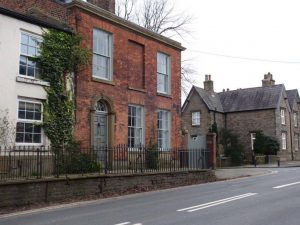 Elm House in 2019 from the same position showing where Kingsway is now.

Kingsway was built around 1930. The house at the far side of Kingsway is 14 (Woodbine Cottage), & 16 Bollington Road.

1911: The Claye family lived at Elm House at this time. Herbert Sandford Claye aged fifty years was the Macclesfield Courier proprietor. He and wife Annie aged forty six years had three children living with them. They had one servant, Beatrice Skirman aged thirty six years and from Buxton. Visiting them at this time was the Venerable Alfred Neild, Archdeacon of Dunedin in New Zealand! By 1916 one of the `children`, Lt Geoffrey Claye, had been killed in the war and was buried in Kantar Military Cemetery in Egypt.

1939: Doctor John William Chadwick (1894-1971) and his wife Doctor Olga Grace Mary Chadwick (1891-1982) were resident at Elm House and had been for four or five years. The house was used as a doctors surgery and became known as Chadwicks. Dr John’s father, Daniel, a retired engineer also lived with them and passed away two years after this census. They had a servant Alice Scotson living with them and her retired mother Mary along with a maid named Jessie a short time later. Dr John Chadwick and his wife Olga apparently did not become NHS doctors when it was introduced in 1948 and remained in private practice although this information is disputed by some who say they were NHS doctors. Dr John was still working until at least 1961. Both John and his wife Olga lived at Elm House until their deaths in 1971 and 1982 respectively and their ashes are in Pott Shrigley graveyard.

The Mottershed family bought numbers 10 and 12 Bollington Road at an auction around 1982. They had a shoe shop in number 10 and they lived in number 12. Later number 10 became an off-licence and video shop. By 1989 the shop also had the odd groceries available. In 1983 some land adjacent to Kingsway off the back garden of Elm House was sold off and two houses were built there. A few years later numbers 10 and 12 were separated internally and number 10 was sold to a The Weave, a company that sells Persian rugs.

So for many years number 10 and number 12 were ‘the same place /connected’ hence why I have included number 10 on this page.

Elm House, number 12 is now used as an architect’s office although it has just been sold at the time of writing (12/2018).

There is very little census information on number 10 but in 1911 John James Parrott, a Wheelwright aged thirty two years from Macclesfield supposedly lived here with his wife Martha Ann thirty four years old and their three sons aged from ten months to four years although they also seemed to be listed as living with their Parrott’s extended family at number 4 Bollington Road, otherwise known as Heywood Farm.

1926: Frank and Ethel Green lived at number 10 according to the Polling District West Ward records.

1939: number 10 was occupied by David Spilsbury aged seventy four years. He was a gardener and lived with his daughter Maud Spilsbury aged fifty six years. Maud’s occupation was a Charwoman (which was a cleaner not a maid apparently).

1911: The occupier was Robert Thompson aged thirty four years, he was a cotton spinner from Bollington. His wife Minnie of the same age was a cotton weaver and was also from Bollington. They had one son, two year old Kenneth-William. Minnie’s mother Ellen (surname unreadable on census) also lived at number 8, she was a midwife at this time at the age of fifty eight years.

1939: Number 8 was still occupied by the now widowed Elizabeth Hilton aged seventy four years and John Hilton Junior, her son, aged forty two years. He was a silk spinner and was married but no mention of a wife on this census.

It is not clear what year number 8 was demolished.