Named `White Cottage` (as you can see is no longer white), forms part of ‘Orme’s Smithy’ which comprises of three terraced cottages and White Cottage. The actual Smithy was the right hand side cottage of the three cottages when looking from the road. 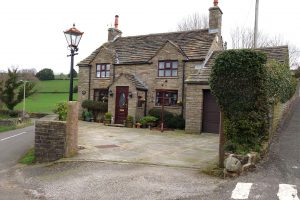 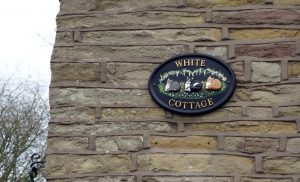 White Cottage above 2019, used to be two cottages. 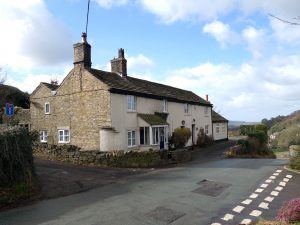 Part of Orme’s Smithy above, photo taken in  2019, consisting of three terraced cottages.

Orme’s Smithy, Sowcar derives it’s name from John Orme who established the smithy at Sowcar in 1698. The surname Orme has been current in this district from 1454. Orme’s Smithy cottages were purchased by John Gaskell senior of Ingersley in 1768 from Cooper Lunt of Manchester for £540. Directories of 1860 and 1874 show the smithy was worked by George Samuel Blease. It remained in the Gaskell family until it was sold as part of Miss A. T. Gaskell’s property in 1930.

Peter Leigh who was a maintenance/ handyman at Ingersley Hall took Orme’s Smithy with his wife Eliza in 1925, see photo below of them with all their children and their spouses. (click on photos to enlarge). 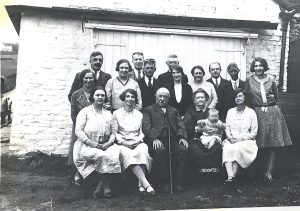 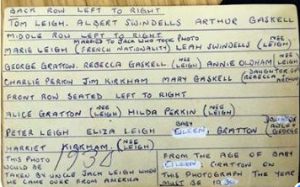 1851: John Bradley aged thirty nine years and from Rainow was living at Orme’s Smithy in this year. He was a cordwainer or shoemaker. Also living there was his wife his wife Elizabeth who was thirty nine years of age and was also from Rainow. They had one daughter and three sons aged from aged three to thirteen years all born in Rainow and a Bollington born nephew who was thirteen years old and was a cotton piecer.

Also living in one of the cottages at Orme’s Smithy in 1851 were the Bracegirdle family. Joseph was forty three years old and a blacksmith from Ashley in Cheshire. His wife was a year younger and from Bollington. They had six children aged between three and seventeen years.

There was also the Lomas family, Claytons, Wadsworths, Jacksons and Simpsons.

1861 and 1871 and onwards George Samuel Blease was working in the Smithy and living in an Orme’s Smithy cottage. He had four children born between 1851 and 1861. It is thought that Blaze Hill might even be named for him as Blease and Blaze are interchangeable on many documents. By 1881 George Blease had moved away from his cottage at Orme’s Smithy following the illness and later the death of his wife Rachel (nee Ford) in 1885. He had moved in with his daughter also Rachel and son in law Henry Hough at 46 Church Street and died in 1899. His son had remained though, see 1891 below.

1881: The Holt family were living at Orme’s Smithy itself. Tom Holt was born there in this year, he died in 1918 fighting for his country in the first World War. His Mother Martha (nee Blease) emigrated to Toronto with her seven children in the early 1900s.

1891: Charles Blease aged forty two years and his family lived here in this year, Charles was a blacksmith and son of George Samuel. Charles`s wife Mary Ellen was also forty two years old and together they had five children aged between two and fifteen years.

Also living at one of the cottages were the Clowes family. Head of the house was sixty three year old David, a general labourer from Spalding in Lincolnshire. His very much younger wife Mary Jane was only twenty seven years old and was born in Bollington. There was a step son of David’s named William K B College, aged seven years and born in Bollington. Also living there was David’s mother in law Sarah College from Rainow, aged sixty two years. Perhaps they got muddled up and Sarah was the wife!

1897: William Lomas resided at Orme’s Smithy at this time.

1911: Jonathon Jackson born 1845 in Pott Shrigley was living at Orme’s Smithy with his sixty three year old wife Sarah Ann from Lyme. Ten years previously Jonathan had been a licence Victualler at The Masonic Arms (now the Poacher’s Inn) just down the lane called Smithy Brow, Rainow as it becomes Ingersley Road. Jonathan was now a general labourer in a fire bricks works [Hammonds at Pott Shrigley?]. They had six children but only two survived. They were still at Orme’s Smithy in 1920, but were gone by 1925.

1914: John Goodwin was registered as living at Orme’s Smithy, and also Fred Green was listed further down the page of Kelly’s Directory.

1915: Jonathon Jackson, Peter Leigh and Moss Emingsberg were all living at cottages at Orme’s Smithy.

Below are the census for 1911 and 1939 kindly sent to me by May Ellen Hockenhull (click on them to enlarge). The cottages start in May’s description as number one being the first of the three terraced on your right as you travel up Smithy Brow then two and three. Cottages four and five are across the road at White House which used to be two cottages. 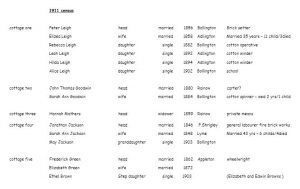 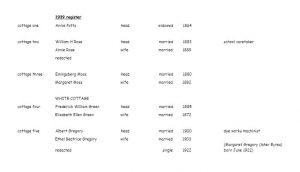 Orme’s Smithy can be seen below on this 1948 photo (click on it to enlarge). White Cottage is clearly visible in the centre of the photo, but the three terraced cottages, that also form part of the area of Orme’s Smithy, are just hidden behind the trees across the road from White Cottage.

The house furthest to the bottom right of the photo is Sowcar Cottage. The white building at the lower centre of the photograph is Sowcar Farmhouse. 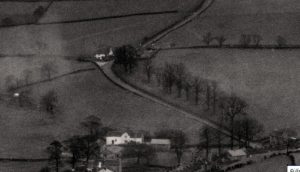 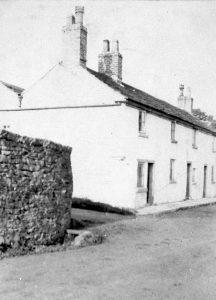 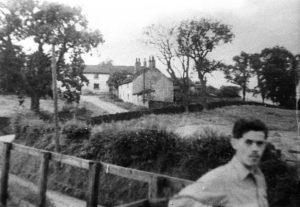 Orme’s Smithy and White Cottage above around 1955 with Alan Stewart (we think) on Spuley Lane. He ran Kirk’s coal merchants.